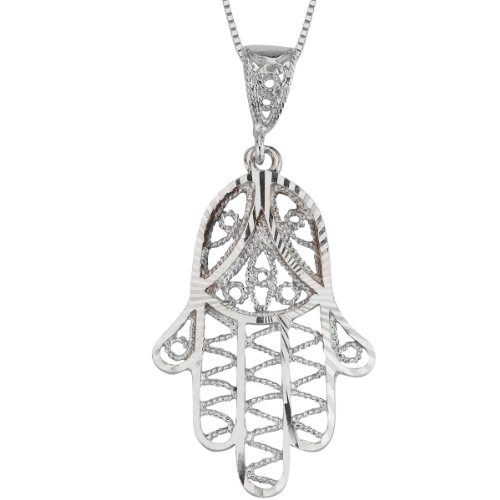 Product Description
Beautiful 14k White Gold Diamond Cut Hamsa Pendant Necklace, 18″. Hamsa or khamsa, is an Arabic word that literally means “five”, but also “the five fingers of the hand. Depicting the open right hand, an image recognized and used as a sign of protection in many societies throughout history, the hamsa is believed to provide defense against the evil eye. It is also known as the hand of Fatima, so named to commemorate Muhammad’s daughter Fatima Zahra. Levantine Christians call it the hand of Mary, for the mother of Jesus. Following its incorporation into Jewish tradition via its widespread use in the Islamic world, it was also renamed the hand of Miriam for Miriam, sister of Moses.